People are asking me about this post from Kathy Sierra. It's a bit inaccurate, and there's two sides to this. That Kathy was doxxed and harassed 7 years is indeed an awful thing, but that doesn’t justify her own bad behavior toward others. 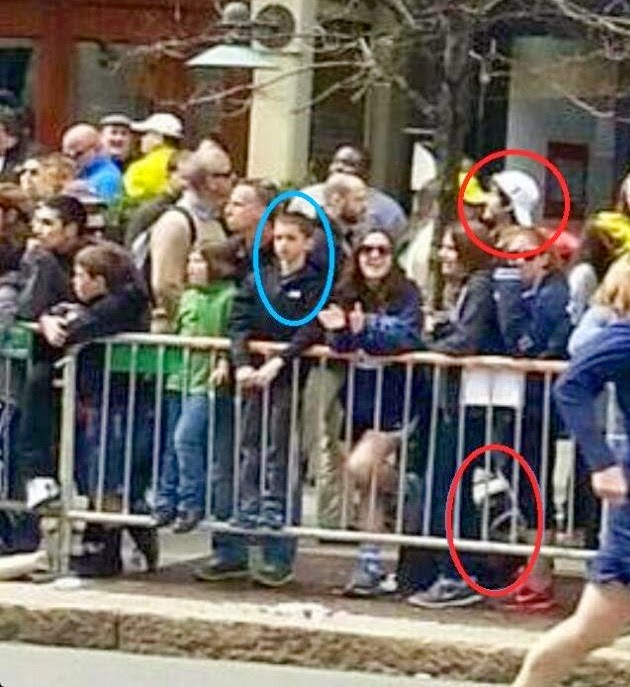 I always defend targets of lynch mobs, such as accused Boston Bomber Dzhokhar Tsarnaev. To the right is a picture of what appears to be Tsarnaev placing the bomb right behind 9 year old boy Martin Richards who died in the blast. I feel sick to my stomach looking at it. But here’s the thing: Tsarnaev is an American citizen, and I will vigorously defend his rights to due process. When they violated his civil rights, interrogating him for days while he hung near death in his hospital bed, begging for a lawyer, I vocally condemned this. All fruits of that interrogation need to be thrown out, even if it means Tsarnaev goes free. And I have no problem saying this to the face of Martin Richard’s parents.

Weev may be a bad human being, but he’s not as vile as mass bomber. I likewise defend him from lynch mobs. His arbitrary conviction and imprisonment under the CFAA was a gross violation of his constitutional rights. Had his conviction stood, the precedent would have threatened all our rights.

What’s wrong with Kathy Sierra’s statement is that she equates defending Weev against the lynch mob with defending Weev’s harassing behavior. That’s like claiming I defend Tsarnaev because I like bombing children. It’s an insulting accusation.

Kathy barged into a conversation last Saturday that started with the claim Weev belonged in jail for doxxing her. My claim was that there's evidence supporting such a conviction – that’s just more lynch mob mentality. There is a NYTimes article from 2008 quoting Weev as claiming he did it, yet Weev has long claimed he was misquoted. The situation is like Dorian Nakamoto, who denies he admitted to Newsweek that he created bitcoin.

As I pointed out on Twitter, we can’t believe Weev either way. He is notoriously unreliable. We can’t trust his denials today, but at the same time, we can’t trust his statements from 2008. As I pointed out on Twitter, Weev has claimed credit for trolls that he was at best only peripherally involved in. Yet, Kathy Sierra insultingly claims this means I somehow believe Weev.

When Sierra bombarded me with Tweets containing insulting and twisted arguments, I was polite in my responses (as you can read for yourself, as they are public). Her reaction, and that of her supporters, is wholly unjustified. Nobody deserves being threatened or doxed, but Kathy certainly deserves some hostility when she makes bad arguments.


Update: I've since had private conversations with Kathy. One-on-one, beyond the 140 character limit, she's actually a much nicer person. We still agree to disagree on this one point, though, but that's a good thing.

The closest that I could come up with is this, but it does not seem to support your claim:

A small group of people — including several of his other personal victims (who I cannot name, obviously) asked me to write to the judge before his sentencing, to throw my weight/story into the “more reasons why weev should be sent to prison”. I did not. Last time, for the record, I did NOTHING but support weev’s case, and did not speak out until after he’d been convicted.

Also, taking a step back, it seems like an impossible standard to expect Kathy, or any of the shockingly large number of victims of active harassment right now, to remain entirely calm in the face of threats to their personal and family safety. Yet you seem interpret her understandable anger to mean that "Kathy certainly deserves all the other hostility that comes her way. She is a very mean person."

Coming from you, I would have expected defence from lynch mobs (even the non-doxxing kind), not explicit encouragement of hostility.

I'm not encouraging hostility. I'm pointing out the hostility that I'm getting from Kathy Sierra.

John Martin said...
This comment has been removed by the author.
2:02 AM

I don't have a dog in this fight, and this may seem pedantic, but it seems to me that you've not defended the bomber, but his rights to just treatment before the law (a fundamental principal I agree with).

It seems that you have actually condemned the characters of the both the accused bomber, and Weev

"Weev may be a bad human being, but he’s not as vile as mass bomber"

When you say you protected him against a Lynch Mob, were you defending him, or his right to a fair trial according to due process ?

If I were Martin Richard's parents and you were to say to me that you defended Dzokhar Tsmarev, I would assume you were defending is purported actions and his world view, and I'd likely react in a very negative way.

Based on my interpretation of this blog, I assume that you'd probably feel justified in saying that I misunderstood your intentions, and lay the blame for my negativity at my feet. That in my book, comes very close to blaming the victim. People who have become or believe they have become victims are already in a heightened emotional state, and I believe the responsibility of those who make provocative statements that could be easily misinterpreted need to be very very clear about what you are saying.

If you'd said plainly that you defended Tsmarev's right to due process under the law, I'd feel pretty annoyed, but I would probably understand.

In this case, from what i've seen, it would appear to me that you have not been as clear about who and what you are defending as you probably should have been.

It amazes me how many people _insist_ on reversing the timeline of introductions. She went ~after Rob~ to start this - he didn't even know who she was at that point. Then, immediately, he is supposed to presume her complete context and entirety of feelings and ONLY THEN can he decide to stand on principle?

No. Standing on principle, rule of law, etc. is ~supposed~ to happen without innuendo driven context. Only evidence.

Nobody accused her of lying - they only said there was no evidence. That's ~correct~. She absolutely pursued the alleged troll in this case - that IS trolling.

The terribly things that happened to her don't change is she, wait for it ... feeds the trolls. And that is what she immediately set out to do upon returning from a hiatus inspired by abusive beyond-trolling she alleges in the first place.

The is A LOT to like about what she wrote .. if it wasn't Rob-centric. Pity.

As an aside, I wrote this the other night on the topic .. judgement works in every direction.

"Kathy certainly deserves all the other hostility that comes her way. She is a very mean person."

The ending of this article only serves to encourage a lynch mob against a woman who has apparently, already been put through hell. It sounds like you are being a very mean person.

Not a cat in this fight but it seems to me that weev and his fellow sociopaths should be imprisoned. Get a little taste of meanness ....

Parts of your reply sounded reasonable up until the last line. You wished hostility on someone that said you were encouraging hostility. I don't think you've helped yourself there.