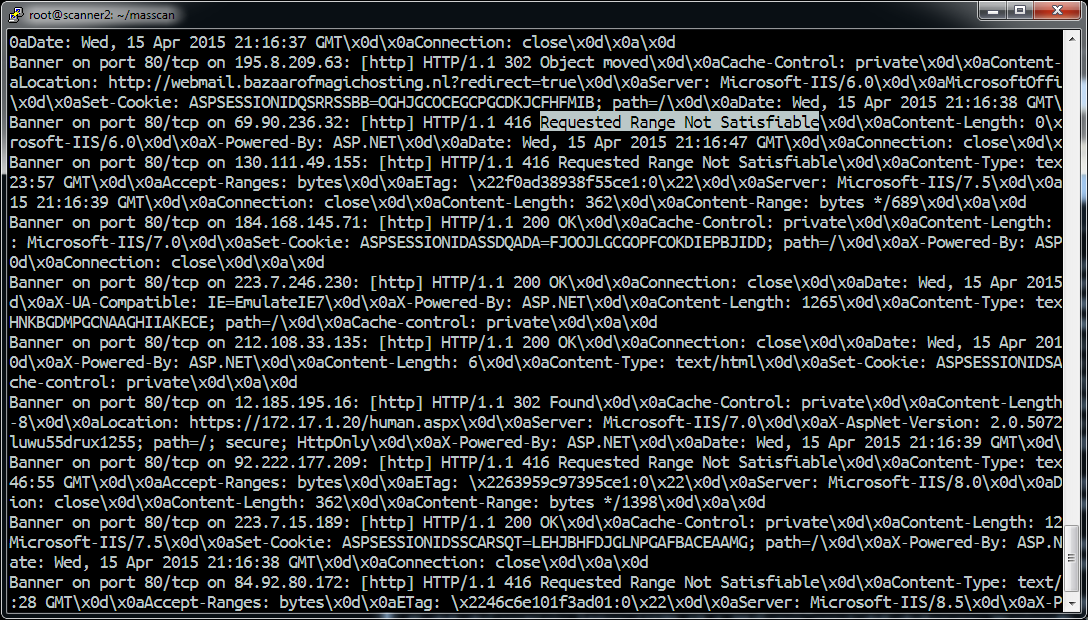 So Microsoft has an important web-server bug, so naturally I'd like to scan the Internet for it. I'm running the scan now, but I'm not sure it's going to give any useful results.

That specific header is harmless, it appears that other variations are the ones that may cause a problem. However, it serves as a useful check to see if the server is patched. If the server is unpatched, it'll return the following error:

From the PoC's say, a response that looks like the following means that it is patched:


The request has an invalid header name

However, when I run the scan across the Internet, I'm getting the following sorts of responses from servers claiming to be IIS:

I suspect the biggest reason is that the "Range" header only is parsed when there is a static file being served. If a script generates the page, then it'll ignore the range. I also suspect that virtual-hosting gets in the way -- that unless the correct DNS name is provided, then it'll reject the request.

Thus, the testing is inconclusive. While I can find some vulnerable responses, just because a server gives me some other response doesn't mean it's not also vulnerable. Thus, I can't really say anything about the extent of the vulnerability.

It's an important message for companies using various tools to see if they are completely patched. Just because the tools can't find vulnerable systems doesn't mean you aren't vulnerable.

Unknown said...
This comment has been removed by the author.
6:52 PM

His scans are the least of your worries.

Asking whitehat to stop scanning you won't do much to stop blackhats, but we'll happily accommodate your request.

The best way to opt-out is send us an email through the normal 'abuse' process.

Oh come on, your not really exempting ranges are you?

Just as a heads up, besides your scan, we noticed scans from Chinese IP addresses ranging from 171.13.14.3 to 171.13.14.62 . Those individuals scanned one system per source IP, and scanned anywhere from 1 second to 39 minutes between attempts. (One destination IP each attempt, no overlap on source or destination.)