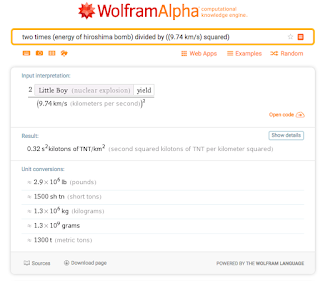 I'd call this bullshit but I'm not used to bullshit being this obviously bullshit-ty...

For starters, the radius of the earth is ~4k miles. The distance from the Earth to the moon is ~240k miles. I'm not sure where you got the idea that the Earth's gravity on the moon was the same as Earth's gravity on Earth's surface but it is complete nonsense by a factor of ~3600x.

I don't have any stake in Brianna's statements or your statements or Elon Musk's supposed plans for world domination and normally I wouldn't normally comment on such things but your post blows through a rather startling number of basic common-sense checks.

2. Can we get a space-shuttle sized object to the moon? Probably though it might be expensive. Can we get an object 1/100 the size of the space-shuttle to the moon? Almost certainly yes though again it might be expensive. Do we have any rockets in space that can put out the same amount of energy as a hundred nuclear warheads? One nuclear warhead? As much energy as the Little Boy? Hell no. Especially when you start accounting for the oxidizer volume. Since getting to the moon takes more energy than falling back, that itself tells us that dropping a space shuttle from the moon to earth will not result in a 100x nuclear explosion.

3. The moon's gravity is 1/6th of Earth's, not say 1/1000th. Anything that you drop on the Earth will need to be lifted from the moon which implies a linear relationship between the amount of energy spent moon-side and the amount of energy released Earth-side (I think...). This point is a bit sketchy because I haven't done the math on this but I'm fairly sure it is correct. Of course the moon's gravity is 1/6th of Earth so there's some benefit but it isn't more than an order of magnitude or two. The real benefit is that the moon rocks apparatus can spend months building up the energy on the moon and it will be released in an instant when the rock hits earth... But you know, that can also be done on Earth (kinetic warheads in LEO for example). All going to the moon gets you is the large but mostly unusable store of potential energy in the moon's sheer mass. The massive logistical issues inherent in such an enterprise are probably not worth it.

Finally if somebody really wanted to setup an orbital bombardment system I think the place they'd want to look at is the asteroid belt. Each individual asteroid is a lot smaller and already it's own piece so there's no need for expensive mining equipment, just some propellor stages (perhaps the Orion project has contributions to make). The asteroids could be brought into Earth orbit for ostensibly legitimate purposes and then forced into a decaying orbit whenever the controlling entity felt like it. Feels like we should be more worried about the Deep Space Mining company instead.

heinlien proposed this in 'moon is a harsh mistress' where the protagonist (mike the sentient computer) claims: 'But we can throw rocks at Earth, Man. We will.'

We can model this as two objects, the earth and the moon. Let's for the sake of this discussion say that they are stationary and the atmosphere, etc... is not relevant. Our hypothetical weapon starts with a rock on the surface of the moon, gives it just enough energy to get to the gravitational equilibrium point between the earth and moon and then Earth's gravity takes over from there. Let x be the distance from earth's center to the moon's center. So x varies from 0 to ~250k miles (we'll call the latter number d_me).

Then for any given x, the potential energy of the rock is*:

U_r is the potential energy of the rock.

U_e, U_m are the potential energy contributions of the earth and the moon (resp.)

G is the gravitational constant.

Now we need to find the equilibrium point x_e. For this, we just need the force from earth's and moon's gravity to be equal:

It is clear that we want the (+) solution because the other one is past both the earth and the moon. Note also that this is the point where U_r is maximized which makes intuitive sense (it takes energy input to get the rock to this point). I get x_e = 3.332e8 meters which corresponds to about 0.9 * d_me.

So at the equilibrium point, all the energy of the rock is the potential energy U_r. Then when this rock actually hits, x = r_e (radius of earth) and U_r is much smaller and the rest is kinetic energy. So E_e, the energy of the explosion is:

After some math, we get:

Note that the implied velocity is ~11 km/s so that part of your post is roughly right.

But recall point #3 I made in my original comment: the weapon still needs to accelerate the rock to get it to the equilibrium point! The energy for that is:

So it may be possible to cause a 100x nuclear explosion on earth but it would take 4.2 nukes worth of energy on the moon to do it. Assuming unrealistically ideal conditions.

Side note: apparently I was wrong about rocket thrusts and whether we can get a space-shuttle sized object to the moon. Ah well...

* This website has a good explanation for gravitational potential energy: http://hyperphysics.phy-astr.gsu.edu/hbase/gpot.html

Thank you for nerding out for us. Breaking out my slide rule for this one!