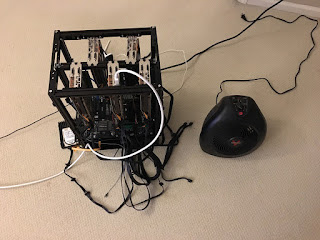 So I carried my GPU rig up to my bedroom to act as a space heater. I thought I'd write some notes on it.

Two such problems are password cracking [*] and cryptocurrency mining.


Password cracking is something cybersecurity professionals regularly need to do. When doing a pentest, or assessment, we'll get lists of passwords we need to crack. Having a desktop computer with a couple of graphics cards is a useful thing to have.

There are three popular cryptocurrencies: Bitcoin, Ethereum, and ZCash. Everyone is using ASICs for Bitcoin, so you can't mine them on a GPU any more, but GPUs are still useful for Ethereum and ZCash. 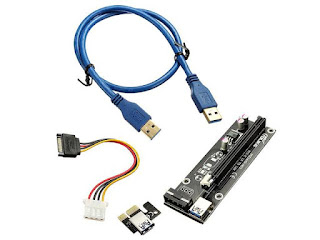 The trick to building a rig with lots of GPU is to get a PCIe 1x extender, so that you can mount the card far away from the motherboard for better cooling. They cost around $10 each. You then need to buy a motherboard with lots of PCIe slots. One with lots of 1x slots will do -- we don't need a lot of bandwidth to the cards.

You then need to buy either a single high-end power supply, or team together two cheaper power supplies. The limitation will be the power from the wall socket, which ranges from around 1600 watts to 1900 watts.

If you don't want to build a rig, but just stick one or two GPUs in your desktop computer, then here are some things to consider.

There are two vendors of GPUs: nVidia and AMD/Radeon. While nVidia has a better reputation for games and high-end supercomputer math (floating point), Radeon's have been better with the integer math used for crypto. So you want Radeon cards.

Older cards work well. The 5-year-old Radeon 7970 is actually a pretty good card for this sort of work. You may find some for free from people discarding them in favor of newer cards for gaming.

If buying newer cards, the two you care about are either the Radeon R9 Fury/Nano, or the Radeon RX 470/480. The Fury/Nano cards are slightly faster, the RX 470/480 are more power efficient.

You want to get at least 4 gigabytes of memory per card, which I think is what they come with anyway. You might consider 8 gigabytes. The reason for this is that Ethereum is designed to keep increasing memory requirements, to avoid the way ASICs took over in Bitcoin mining. At some point in the future, 4 gigabytes won't be enough and you'll need 8 gigabytes. This is many years away, but seeing how old cards remaining competitive for many years, it's something to consider.

With all this said, if you've got a desktop and want to add a card, or if you want to build a rig, then I suggest the following card:


A few months from now, things will of course change, but it's a good choice for now. This is especially useful for rigs: 6 Fury cards in a rig risks overloading the wall socket, so that somebody innocently turning on a light could crash your rig. In contrast, a rig 6 RX480 cards fit well within the power budget of a single socket.

Now let's talk software. For password cracking, get Hashcat. For mining, choose a mining pool, and they'll suggest software. The resources at zcash.flypool.org are excellent for either Windows or Linux mining. Though, on Windows, I couldn't get mining to work unless I also went back to older video drivers, which was a pain.

Let's talk electrical power consumption. Mining profitability is determined by your power costs. Where I live, power costs $0.05/kwh, except during summer months (June through September). This is extremely cheap. In California, power costs closer to $0.15/kwh. The difference is significant. I make a profit at the low rates, but would lose money at the higher rates.

Because everyone else is doing it, you can never make money at mining. Sure, if you run the numbers now, you may convince yourself that you'll break even after a year, but that assumes everything stays static. Other people are making the same calculation, and will buy new GPUs to enter the market, driving down returns, so nobody ever breaks even. The only time mining is profitable is when the price of the cryptocurrency goes up -- but in that case, you'd have made even more money just buying the cryptocurrency instead of a mining rig.

The reason I mine is that I do it over TOR, the Onion Router that hides my identity. This mines clean, purely anonymous Bitcoins that I can use (in theory) to pay for hosting services anonymously. I haven't done that yet, but I'll have several Bitcoins worth of totally anonymous currency to use if I ever need them.

Otherwise, I use the rig for password cracking. The trick to password cracking is being smarter (knowing what to guess), not being more powerful. But having a powerful rig helps, too, especially since I can just start it up and let it crunch unattended for days.

You probably don't want to build a rig, unless you are geek like me who enjoys playing with technology. You'll never earn back what you invest in it, and it's a lot of hassle setting up.

On the other hand, if you have a desktop computer, you might want to stick in an extra graphics card for password cracking and mining in the background. This is especially true if you want to generate anonymous Bitcoin.

In the past couple of years, the Maxwell and later NVIDIA cards are actually better for both performance/$ and performance/kWH than most AMD cards.

Here is a Google Docs spreadsheet that the hashcat team uses to track performance testing across cards.

Interesting that you don't use any cloud service to spin up x machines to have a result in an hour instead of 10 hours at your home.

Might be even cheaper having some basic workflow which is doing it for you instead of maintaining a rig at home.

I built a mining rig because it was just fun to do! For anonymity, you can still buy OneVanilla Prepaid VISA cards with cash at many retailers. More useful than bitcoin right now and easier to get in the amounts you might want.