One of these days I'm going to write a guide for journalists reporting on the cyber. One of the items I'd stress is that they often fail to read the text of what is being said, but instead read some sort of subtext that wasn't explicitly said. This is valid sometimes -- as the subtext is what the writer intended all along, even if they didn't explicitly write it. Other times, though the imagined subtext is not what the writer intended at all.


A good example is the recent Equifax breach. The original statement says:

The word consumers was widely translated to customers, as in this Bloomberg story:


Equifax Inc. said its systems were struck by a cyberattack that may have affected about 143 million U.S. customers of the credit reporting agency

But these aren't the same thing. Equifax is a credit rating agency, keeping data on people who are not its own customers. It's an important difference.


Another good example is yesterday's quote "confirming" that the "Apache Struts" vulnerability was to blame:


Equifax has been intensely investigating the scope of the intrusion with the assistance of a leading, independent cybersecurity firm to determine what information was accessed and who has been impacted. We know that criminals exploited a U.S. website application vulnerability. The vulnerability was Apache Struts CVE-2017-5638.

But it doesn't confirm Struts was responsible. Blaming Struts is certainly the subtext of this paragraph, but it's not the text. It mentions that criminals had exploited the Struts vulnerability, but don't actually connect the dots to the breach we are all talking about.

There's probably reasons for this. While it's easy for forensics to find evidence of Struts exploitation in logfiles, it's much harder to connect this to the breach. While they suspect Struts, they may not actually be able to confirm it. Or, maybe they are trying to cover things up, where they feel failing to patch is a lesser crime than what they really did.

It's at this point journalists should earn their pay. Instead rewriting what they read on the Internet, they could do legwork and call up Equifax PR and ask.


The purpose of this post isn't to discuss Equifax, but the tendency of people to "read between the lines", to read some subtext that wasn't actually expressed in the text. Sometimes the subtext is legitimately there, such as how Equifax clearly intends people to blame Struts thought they don't say it outright. Sometimes the subtext isn't there, such as how Equifax doesn't mean it's own customers, only "U.S. consumers". Journalists need to be careful about making assumptions about the subtext.


Update: The Equifax CSO has a degree in music. Some people have criticized this. Most people have defended this, pointing out that almost nobody has an "infosec" degree in our industry, and many of the top people have no degree at all. Among others, @thegrugq has pointed out that infosec degrees are only a few years old -- they weren't around 20 years ago when today's corporate officers were getting their degrees.

Again, we have the text/subtext problem, where people interpret infosec degrees as being the same as computer-science degrees, the later of which have existed for decades. Some, as in this case, consider them to be wildly different. Others consider them to be nearly the same. 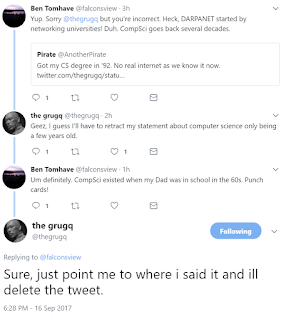 Continuing on your example: The Washington Post wrote "Data of 143 million Americans exposed in hack of credit reporting agency Equifax", and Brian Krebs wrote "Breach at Equifax May Impact 143M Americans". Both assumed "US consumer" meant "American", but nowhere does the press release say that (the breach presumably included many foreigners living in the US as well: most people with green cards and many visa holders have SSNs).

Componentbuy is one of the fastest growing distributors of Semiconductors and electronic Components in the world.

Supports more than 20 Millions of Electronic components sourcing needs with Engineering Data support. Locating all your required components for your design and production needs.

Our website will act as tool for the sourcing and Design engineers on the components needs.

Despite what much of the industry has said in follow-up discussions concerning the CSO's degree, infosec (not CS) degrees have been available for at least 14 years. Yes, your article says 20 years and I believe that is still accurate. However, I feel it is worth mentioning that much of the industry is misinformed when they say infosec degrees are something that just popped up a couple years ago.