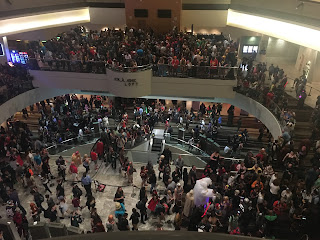 tldr: I went to DragonCon, a conference of 85,000 people, so sniff WiFi packets and test how many phones now uses MAC address randomization. Almost all iPhones nowadays do, but it seems only a third of Android phones do.


Ten years ago at BlackHat, we presented the "data seepage" problem, how the broadcasts from your devices allow you to be tracked. Among the things we highlighted was how WiFi probes looking to connect to access-points expose the unique hardware address burned into the phone, the MAC address. This hardware address is unique to your phone, shared by no other device in the world. Evildoers, such as the NSA or GRU, could install passive listening devices in airports and train-stations around the world in order to track your movements. This could be done with $25 devices sprinkled around a few thousand places -- within the budget of not only a police state, but also the average hacker.

In 2014, with the release of iOS 8, Apple addressed this problem by randomizing the MAC address. Every time you restart your phone, it picks a new, random, hardware address for connecting to WiFi. This causes a few problems: every time you restart your iOS devices, your home network sees a completely new device, which can fill up your router's connection table. Since that table usually has at least 100 entries, this shouldn't be a problem for your home, but corporations and other owners of big networks saw their connection tables suddenly get big with iOS 8.

In 2015, Google added the feature to Android as well. However, even though most Android phones today support this feature in theory, it's usually not enabled.


Recently, I went to DragonCon in order to test out how well this works. DragonCon is a huge sci-fi/fantasy conference in Atlanta in August, second to San Diego's ComicCon in popularity. It's spread across several neighboring hotels in the downtown area. A lot of the traffic funnels through the Marriot Marquis hotel, which has a large open area where, from above, you can see thousands of people at a time.

And, with a laptop, see their broadcast packets.

So I went up on a higher floor and setup my laptop in order to capture "probe" broadcasts coming from phones, in order to record the hardware MAC addresses. I've done this in years past, before address randomization, in order to record the popularity of iPhones. The first three bytes of an old-style, non-randomized address, identifies the manufacturer. This time, I should see a lot fewer manufacturer IDs, and mostly just random addresses instead.

I recorded 9,095 unique probes over a couple hours. I'm not sure exactly how long -- my laptop would go to sleep occasionally because of lack of activity on the keyboard. I should probably setup a Raspberry Pi somewhere next year to get a more consistent result.

A quick summary of the results are:


The 9,000 devices were split almost evenly between Apple and Android. Almost all of the Apple devices randomized their addresses. About a third of the Android devices randomized. (This assumes Android only randomizes the final 3 bytes of the address, and that Apple randomizes all 6 bytes -- my assumption may be wrong).

A table of the major results are below. A little explanation:


Hi, am here to share little testimony of how i got a real student loan from Financial Home, i never believe on online loans lenders can be still real and legit this is because i have lost so many fee to scammers due to upfront fee being asked by them. but to the Glory of God Financial Loan Home assisted me with all the loan i needed they are real and legit. they lend me $30,000 usd which i used for paying off my student loan debt. this loan company is for real give them a try if you need a loan and you will never regret contacting them, this is the company email address is financialhome34@outlook.com

You have a couple details of MAC randomization on iOS incorrect.

First off, randomization is only done when probing for networks. When a client joins a network and requests an IP via DHCP that's done using the device's actual hardware address, which means your home network always sees the same device. There's no issue with filling up router tables.

Second, MAC randomization cannot be disabled on iOS, no matter what corporations demand. In fact, this is a non-issue for corporations as per my explanation above.

so how do you deactivate the html formatting of emails?

At last on September 20, 1975, President Gerald R. Portage marked a law which restored the yearly recognition of Veterans Day to its unique date of Nov. 11, starting in 1978. From that point forward, the Veterans Day holiday has been seen on Nov. 11.
Veterans Day Pictures to Download
Veterans Day Facts