People keep retweeting this ACLU graphic in response to the FCC's net neutrality decision. In this post, I debunk the first item on the list. In other posts [2] [4] I debunk other items. 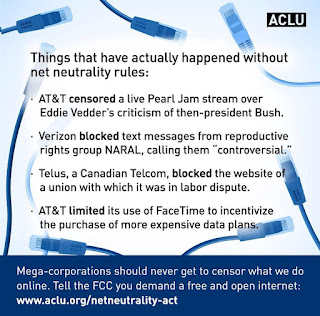 First of all, this obviously isn't a Net Neutrality case. The case isn't about AT&T acting as an ISP transiting network traffic. Instead, this was about AT&T being a content provider, through their "Blue Room" subsidiary, whose content traveled across other ISPs. Such things will continue to happen regardless of the most stringent enforcement of NetNeutrality rules, since the FCC doesn't regulate content providers.

Thirdly, and this is the funny bit, Tim Wu, the guy who defined the term "net neutrality", recently wrote an op-ed claiming that while ISPs shouldn't censor traffic, that content providers should. In other words, he argues that companies AT&T's Blue Room should censor political content.

What activists like ACLU say about NetNeutrality have as little relationship to the truth as Trump's tweets. Both pick "facts" that agree with them only so long as you don't look into them.

It had been also traditional to bring the Yule Log in to the house and light it on Holiday Eve. It had been lit by using a piece of the prior years log and then would burnt non-stop until Twelfth Evening (nights the 5th January/Day of 6th January). Traditions also said that any greenery such as Holly, Ivy and Mistletoe should only be studied in to the house on Holiday Eve.
Merry Christmas Pictures 2017
Merry Christmas Images 2017