The question is about a blog post that claims Tor privately tips off the government about vulnerabilities, using as proof a "vulnerability" from October 2007 that wasn't made public until 2011.

The tl;dr is that it's bunk. There was no vulnerability, it was a feature request. The details were already public. There was no spy agency involved, but the agency that does Voice of America, and which tries to protect activists under foreign repressive regimes.

The issue is that Tor traffic looks like Tor traffic, making it easy to block/censor, or worse, identify users. Over the years, Tor has added features to make it look more and more like normal traffic, like the encrypted traffic used by Facebook, Google, and Apple. Tors improves this bit-by-bit over time, but short of actually piggybacking on website traffic, it will always leave some telltale signature.

An example showing how we can distinguish Tor traffic is the packet below, from the latest version of the Tor server: 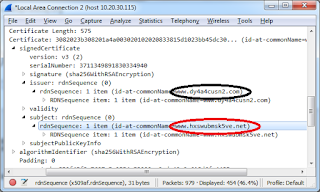 Had this been Google or Facebook, the names would be something like "www.google.com" or "facebook.com". Or, had this been a normal "self-signed" certificate, the names would still be recognizable. But Tor creates randomized names, with letters and numbers, making it distinctive. It's hard to automate detection of this, because it's only probably Tor (other self-signed certificates look like this, too), which means you'll have occasional "false-positives". But still, if you compare this to the pattern of traffic, you can reliably detect that Tor is happening on your network.

This has always been a known issue, since the earliest days. Google the search term "detect tor traffic", and set your advanced search dates to before 2007, and you'll see lots of discussion about this, such as this post for writing intrusion-detection signatures for Tor.

Among the things you'll find is this presentation from 2006 where its creator (Roger Dingledine) talks about how Tor can be identified on the network with its unique network fingerprint. For a "vulnerability" they supposedly kept private until 2011, they were awfully darn public about it. 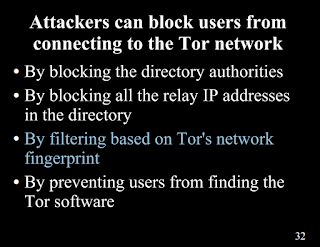 The above blogpost claims Tor kept this vulnerability secret until 2011 by citing this message. It's because Levine doesn't understand the terminology and is just blindly searching for an exact match for "TLS normalization". Here's an earlier proposed change for the long term goal of to "make our connection handshake look closer to a regular HTTPS [TLS] connection", from February 2007. Here is another proposal from October 2007 on changing TLS certificates, from days after the email discussion (after they shipped the feature, presumably).

What we see here is here is a known problem from the very beginning of the project, a long term effort to fix that problem, and a slow dribble of features added over time to preserve backwards compatibility.

Now let's talk about the original train of emails cited in the blogpost. It's hard to see the full context here, but it sounds like BBG made a feature request to make Tor look even more like normal TLS, which is hinted with the phrase "make our funders happy". Of course the people giving Tor money are going to ask for improvements, and of course Tor would in turn discuss those improvements with the donor before implementing them. It's common in project management: somebody sends you a feature request, you then send the proposal back to them to verify what you are building is what they asked for.

As for the subsequent salacious paragraph about "secrecy", that too is normal. When improving a problem, you don't want to talk about the details until after you have a fix. But note that this is largely more for PR than anything else. The details on how to detect Tor are available to anybody who looks for them -- they just aren't readily accessible to the layman. For example, Tenable Networks announced the previous month exactly this ability to detect Tor's traffic, because any techy wanting to would've found the secrets how to. Indeed, Teneble's announcement may have been the impetus for BBG's request to Tor: "can you fix it so that this new Tenable feature no longer works".

To be clear, there are zero secret "vulnerability details" here that some secret spy agency could use to detect Tor. They were already known, and in the Teneble product, and within the grasp of any techy who wanted to discover them. A spy agency could just buy Teneble, or copy it, instead of going through this intricate conspiracy.

The issue isn't a "vulnerability". Tor traffic is recognizable on the network, and over time, they make it less and less recognizable. Eventually they'll just piggyback on true HTTPS and convince CloudFlare to host ingress nodes, or something, making it completely undetectable. In the meanwhile, it leaves behind fingerprints, as I showed above.

What we see in the email exchanges is the normal interaction of a donor asking for a feature, not a private "tip off". It's likely the donor is the one who tipped off Tor, pointing out Tenable's product to detect Tor.

Whatever secrets Tor could have tipped off to the "secret spy agency" were no more than what Tenable was already doing in a shipping product.

Update: People are trying to make it look like Voice of America is some sort of intelligence agency. That's a conspiracy theory. It's not a member of the American intelligence community. You'd have to come up with a solid reason explaining why the United States is hiding VoA's membership in the intelligence community, or you'd have to believe that everything in the U.S. government is really just some arm of the C.I.A.

hello guys,have you ever wondered what your spouse is doing behind you?i was able to get proof that my ex husband was cheating on me through the help of a good soul which was referred to me by Mrs Jane.i messaged him and to my greatest surprise he's real and he got me result in less minutes,he's a great professional ,applause for him always as i told him i will let the world know him,do you have any problem spying on someone,track a cheating spouse,hack into text messages and phone calls,bank statement hacks and criminal records erased also you can boost your school grade,hack into whats' app,facebook,viber,emails,gmail and whatsoever related to hacking or your trying to get into a phone without the owner's consent,he's an expert and won't ever fail you. contact hackdigg at g mail dot com or text his number +15186284630 ,also you can text him on whats app or call him with this number on what's app +15185049376 and let him know i referred you.for sure he will help you.
Email:hackdigg at gmail dot com
Text num:+15186284630
what's app num:+15185049376
tell him Roseline referred you.