As most people are switching their rotating disk drives to solid state flash drives, I thought I'd write up this note: avoid the SandForce controllers. While they excel in a few tasks, they perform exceptionally poorly in many tasks, like encrypted drives. This is especially a concern for MacBook buyers, where there's a 50% chance you'll get a SandForce controller in your unit.

One of the most popular controllers is from a company called SandForce. It's popular because they use a unique trick: they compress data on the fly. For compressible data, this leads to the highest read/write speeds of any SSD. Thus, your computer will boot faster using a SandForce controllers, since programs tend to be about 50% compressible.

This compression leads to other desirable features. It reduces the "write amplification" effect of SSDs and increases their "durability". SSDs degrade over time as data is repeatedly modified, and the SandForce compression reduces this effect.

But there is a tradeoff. For incompressible data, the SandForce controllers perform the slowest. Sure, they still perform better than rotating disks, but they have a noticeable performance degradation compared to other SSDs.

If you have a notebook computer, you definitely want to enable full disk encryption (like Microsoft BitLocker, or Apple FileVault, or Linux TrueCrypt). That way, if it's stolen or lost, nobody gets your private data, such as those passwords you cache in your browser. 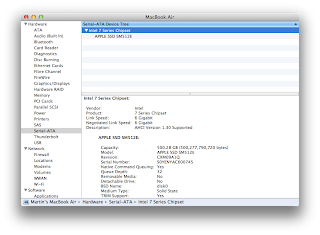 This is a problem for Apple MacBooks. The latest generation of MacBook Retina and MacBook Airs come with either a Samsung SSD using a Samsung controller, or a Toshiba SSD using a SandForce controller. Unfortunately, it's a lottery -- you can't control which SSD you get when buying one. If you get the Samsung controller, it'll work great for FileVault. If you get a Toshiba/SandForce combo, it'll suck for FileVault. To see which one you have, go to AppleMenu -- About This Mac  -- More Info -- System Report -- Serial-ATA and look for something like "Apple SSD SM512E". The "SM" means "Samsung", whereas "TS" means "Toshiba".

Rumor has it that if you don't like what the lottery gave you that you can take it back to the nearest Apple store and exchange it for the one that you want. I haven't tried this out, so I don't know.

Another issue with SandForce controllers is that there has been many buggy firmwares. You can see this with vendors like OCZ that have shipped many firmware updates to fix bugs in their SandForce products. I bought a SandForce based SSD from OCZ that I could never get working, no matter which firmware I used.

These days, Intel SSD and Samsung SSDs have excellent reputations, whereas vendors like OCZ have crap reputation. If I had to buy a new SSD for a desktop or notebook, I'd definitely go with them, even though they are slightly more expensive. But I wouldn't get the Intel 520 SSD because it's SandForce based.

So in summary, while SandForce controllers are probably excellent for certain applications, I recommend avoiding them for generic applications, such as for your notebook.

Update: Rumor is that Toshiba/SandForce drives only go up to 256gigs, so that if you order the 512gig version of the MacBook, you'll get a Samsung drive.
By Robert Graham

Thanks for the heads-up. Good news, my new air arrived with the SM512E.

Thanks for the info! Not buying Macbooks, but looking to upgrade some Lenovo drives and this was enlightening.

Just not true about the top drive makers, Intel and Kingston drives are top notch, but Samsung SSD drives suck. They are slow and unreliable. I had 2 failed Samsung SSD drives and one of my friend's Samsung 540 just died after 2 weeks. All my other Intel and Kingston drives are still running for over a year. Heck, even my OCZ 60GB old school is still running ever since the last firmware upgrade. The only SSD drive that ever died on me so far is the Samsung, and even their DLP TV died on me two years ago. I would stay away from their products, they are not as reliable as you think. Samsung sucks!

Totaly agree with article.
Got this Corsair F90 Force based on Sf-1200 , like on this picture:
http://www.angeldatarecovery.com/wp-content/uploads/2013/06/PCBFront2-1024x682.jpg
, ssd died in 1st year of using . When i changed it on SSD Intel G2 series perfomance increased by half.

I don't know if I just got lucky or if the people who leave posts are unlucky, but I had a Vertex 2 in my old comp, and have a pair of Vertex 3's in my new one. All are over a year into their use, and all still perform wonderfully. (Granted they were insanely quick their first month of use, but that was their break-in period, and everything has a break-in period.) I can't see why OCZ has such a terrible rep, but I also haven't tried a different brand as my first OCZ is still a beast for my needs.