I learn something new every DefCon -- from the taxi drivers. This year I asked the cabby about that annoying beeping thing to the left of the steering wheel. I show picture of this device in the picture to the below, it's that green display of 0.9 with a red dot underneath, in the lower left of the picture. 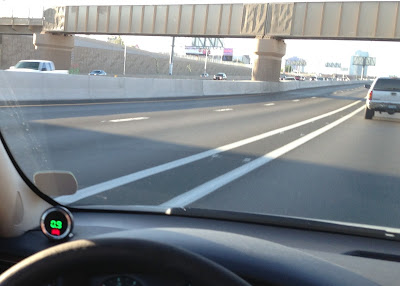 His answer was that it's a tailgating meter from the insurance company. It shows red below the number because, at the moment, he was tailgating (due to the wide angle lens on my iPhone, the car in front is closer than it appears). He sped up to show that when he gets really close, the beeps get angrier.

He also pointed to other insurance-imposed sensors on the car, such as the "dash cams" above the rear view mirror, one pointing forward and one pointing backwards. In the event of an accident, the insurance company will have full telemetry to know precisely who is at fault.

I find this fascinating for two reasons.

The first is that such sensors are plummeting in price. In a few years, such things will be standard equipment on cars -- not just taxis, but the cars we drive. In a couple of decades, the push to automatic (Google drive) cars will be all about liability and insurance, because drivers will not be willing to be caught on tape causing an accident.

The second reason this interests me is how this fits in the cybersecurity industry. Whenever insurance touches an industry it starts to dictate rules. Companies will either refuse you as a customer, or offer price discounts. Thus, "cyber insurance" will impose rules like "firewall logging" on its customers.

I wish the tailgate alarm was standard in every vehicle. After seeing so many people trail me by about five feet going 60mph, I've accepted that it's only a matter of time before I get rear-ended. And when I do, I'm replacing the stock rear bumper on my truck with an off-road model made of 1/4" steel.