"Fast and Furious 8: Fate of the Furious"

So "Fast and Furious 8" opened this weekend to world-wide box office totals of $500,000,000. I thought I'd write up some notes on the "hacking" in it. The tl;dr version is this: yes, while the hacking is a bit far fetched, it's actually more realistic than the car chase scenes, such as winning a race with the engine on fire while in reverse. 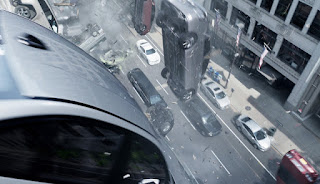 How real is this?

Well, today, few cars have a mechanical link between the computer and the steering wheel. No amount of hacking will fix the fact that this component is missing.

With that said, most new cars have features that make hacking possible. I'm not sure, but I'd guess more than half of new cars have internet connections (via the mobile phone network), cameras (for backing up, but also looking forward for lane departure warnings), braking (for emergencies), and acceleration.

In other words, we are getting really close.

As this Wikipedia article describes, there are levels for autonomous cars. At level 2 or 3, cars get automated steering, either for parking or for staying in the lane. Level 3 autonomy is especially useful, as it means you can sit back and relax while your car is sitting in a traffic jam. Higher levels of autonomy are still decades away, but most new cars, even the cheapest low end cars, will be level 3 within 5 years. That they make traffic jams bearable makes this an incredibly attractive feature.

Thus, while this scene is laughable today, it'll be taken seriously in 10 years. People will look back on how smart this movie was at predicting the future.

The recent ShadowBrokers dump of NSA hacking tools show that hackers simply don't have a lot of range. Hacking one car is easy -- hacking all different models, makes, and years of cars is far beyond the ability of any hacking group, even the NSA.

I mean, a single hack may span more than one car model, and even across more than one manufacturer, because they buy such components from third-party manufacturers. Most cars that have cameras buy them from MobileEye, which was recently acquired by Intel.  As I blogged before, both my Parrot drone and Tesla car have the same WiFi stack, and both could be potential hacked with the same vulnerability. So hacking many cars at once isn't totally out of the question.

It's just that hacking all the different cars in a garage is completely implausible.

The plot of the last two movies as been about the "God's Eye", a device that hacks into every camera and satellite to view everything going on in the world.

First of all, all hacking is software. The idea of stealing a hardware device in order enable hacking is therefore (almost) always fiction. There's one corner case where a quantum chip factoring RSA would enable some previously impossible hacking, but it still can't reach out and hack a camera behind a firewall.

Hacking security cameras around the world is indeed possible, though. The Mirai botnet of last year demonstrated this. It wormed its way form camera to camera, hacking hundreds of thousands of cameras that weren't protected by firewalls. It used these devices as simply computers, to flood major websites, taking them offline. But it could've also used the camera features, to upload pictures and video's to the hacker controlling these cameras.

However, most security cameras are behind firewalls, and can't be reached. Building a "Gody's Eye" view of the world, to catch a target every time they passed in front of a camera, would therefore be unrealistic.

Moreover, they don't have either the processing power nor the bandwidth to work like that. It takes heavy number crunching in order to detect faces, or even simple things like license plates, within videos. The cameras don't have that. Instead, cameras could upload the videos/pictures to supercomputers controlled by the hypothetical hacker, but the bandwidth doesn't exist. The Internet is being rapidly upgraded, but still, Internet links are built for low-bandwidth webpages, not high-bandwidth streaming from millions of sources.

This rapidly changing. Cameras are rapidly being upgraded with "neural network" chips that will have some rudimentary capabilities to recognize things like license plates, or the outline of a face that could then be uploaded for more powerful number crunching elsewhere. Your car's cameras already have this, for backup warnings and lane departure warnings, soon all security cameras will have something like this. Likewise, the Internet is steadily being upgraded to replace TV broadcast, where everyone can stream from Netflix all the time, so high-bandwidth streams from cameras will become more of the norm.

Even getting behind a firewall to the camera will change in the future, as owners will simply store surveillance video in the cloud instead of locally. Thus, the hypothetical hacker would only need to hack a small number of surveillance camera companies instead of a billion security cameras. 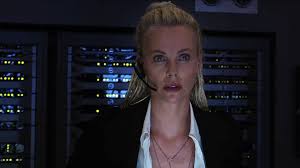 The evil villain in the movie (named "Cipher", or course) has her secret headquarters on an airplane that flies along satellite "blind spots" so that it can't be tracked.

This is nonsense. Low resolution satellites, like NOAA satellites tracking the weather, cover the entire planet (well, as far as such airplanes are concerned, unless you are landing in Antartica). While such satellites might not see the plane, they can track the contrail (I mean, chemtrail). Conversely high resolution satellites miss most of the planet. If they haven't been tasked to aim at something, they won't see it. And they can't be aimed at you unless they already know where you are. Sure, there are moving blind spots where even tasked satellites can't find you, but it's unlikely they'd be tracking you anyway.

Since the supervillain was a hacker, the airplane was full of computers. This is nonsense. Any compute power I need as a hacker is better left on the Earth's surface, either by hacking cloud providers (like Amazon AWS, Microsoft Azure, or Rackspace), or by hiding data centers in Siberia and Tibet. All I need is satellite communication to the Internet from my laptop to be a supervillain. Indeed, I'm unlikely to get the bandwidth I need to process things on the plane. Instead, I'll need to process everything on the Earth anyway, and send the low-bandwidth results to the plane.

In any case, if I were writing fiction, I'd have nuclear-powered airplanes that stayed aloft for months, operating out of remote bases in the Himalayas or Antartica.

However, an EMP with the features, power, and effects in the movie is, of course, fictional. EMPs, even non-nuclear ones, are abused in films/TV so much that the Wikipedia pages on them spend a lot of time debunking them.

It would be cool if, one day, they used EMP realistically. In this movie, real missile-tipped with non-nuclear explosively-pumped flux compression generators could've been used for the same effect. Of course, simple explosives that blow up electronics also work.

Since hacking is the goto deus ex machina these days, they could've just had the hackers disable the power instead of using the EMP to do it.

In the movie, the hero uses his extraordinary driving skills to blow up a submarine. Given this level of willing disbelief, the exaggerated hacking is actually the least implausible bits of the movie. Indeed, as technology changes, making some of this more possible, the movie might be seen as predicting the future.

Billiger Mietwagen DE said...
This comment has been removed by a blog administrator.
4:26 PM

Unknown said...
This comment has been removed by a blog administrator.
8:52 PM