No, a researcher didn't find Olympics app spying on you

For the Beijing 2022 Winter Olympics, the Chinese government requires everyone to download an app onto their phone. It has many security/privacy concerns, as CitizenLab documents. However, another researcher goes further, claiming his analysis proves the app is recording all audio all the time. His analysis is fraudulent. He shows a lot of technical content that looks plausible, but nowhere does he show anything that substantiates his claims.

Average techies may not be able to see this. It all looks technical. Therefore, I thought I'd describe one example of the problems with this data -- something the average techie can recognize.

His "evidence" consists screenshots from reverse-engineering tools, with red arrows pointing to the suspicious bits. An example of one of these screenshots is this on: 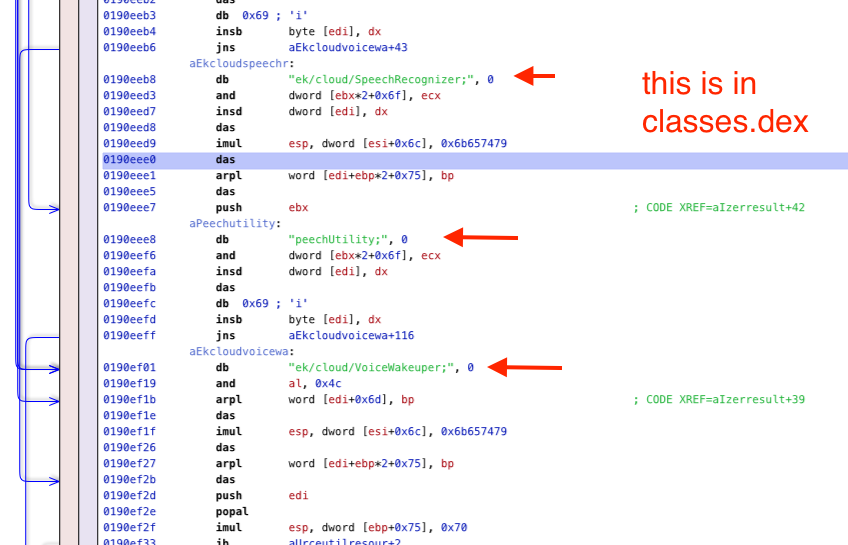 It fails the sniff test. Different researchers will notice different things first. Famed google researcher Tavis Ormandy points out one flaw. In this post, I describe what jumps out first to me. That would be the 'imul' (multiplication) instruction shown in the blowup below:

It's obviously ASCII. In other words, it's a series of bytes. The tool has tried to interpret these bytes as Intel x86 instructions (like 'and', 'insd', 'das', 'imul', etc.). But it's obviously not Intel x86, because those instructions make no sense.

No, no. Techies aren't expected to be able to read hex this way. Instead, we are expected to recognize what's going on. I just used a random website to interpret hex bytes as ASCII.

QED: this isn't actually an Intel x86 imul instruction, it's ASCII text that the tool has tried to interpret as x86 instructions.

At first glance, all those screenshots by the researcher look very technical, which many will assume supports his claims. But when we actually look at them, none of them support his claims. Instead, it's all just handwaving nonsense. It's clear the researchers doesn't understand them, either.

Thank you for sharing useful information with us. please keep sharing like this. And if you are searching a unique and Top University in India, Colleges discovery platform, which connects students or working professionals with Universities/colleges, at the same time offering information about colleges, courses, entrance exam details, admission notifications, scholarships, and all related topics. Please visit below links:

No need to force country people for a using app like this, its all about people choice. Please check more about Affordable marketing agency, Rough Terrain Crane, rough terrain crane rental